Rust is designed by a committee, by choice.

If you ever have managed a project, you should smell the unfocused monstrosity coming from 100 KM away.

And yet, after many years, I've come to the conclusion that in Rust's case, it's a huge asset instead of a liability.

It's unquestionable that Rust is packed with a lot of features, some useful, some useless, and, at first glance, may appear far from minimalist.

When I take a few steps back and start thinking about the bigger picture, I realize that, today, Rust is the first language that can reliably do everything well. 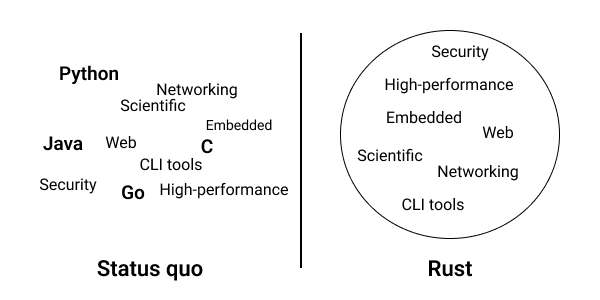 That's why today I say that Rust is minimalist: by being able to focus on a single language and ecosystem, developers can boost their effectiveness.

Most companies have polyglot codebases that are costing them big $$ and they are not even aware of the underlying reasons.

Compound effect: When you have 5 different languages... you inevitably implement the same things 5 times.

With a single language, you can have a single library of software packages that can be used across all the teams of the organization.

Hiring: What costs more: Hiring people for 5 different technologies or allowing people to move freely internally because the tech stack is the same everywhere?

Tooling: Related to talents, every programming languages and frameworks have their own workflows and specific tools. It takes time to train people and to update the tools when they are in use.

Reliability: When sh*t happens (it's not a matter of "if" but "when"), do you prefer to have everyone able to fix it, or to wait for the only experts on the topic to come back from their holidays?

Ans this is even before talking about correctness and performance.

Rust may not be a silver bullet, but now I ask you, what is best for an organization: spending resources on training and implementing the same things in 5 different programming languages, or focusing their efforts on a single, polyvalent language that can be used across a large panel of domains?

1 email / week to learn how to (ab)use technology for fun & profit: Programming, Hacking & Entrepreneurship.
I hate spam even more than you do. I'll never share your email, and you can unsubscribe at any time.
Tags: hacking, programming, rust, minimalism