Async Rust: What is a runtime? Here is how tokio works under the hood

Last week, we saw the difference between Cooperative and Preemptive scheduling and how it enables resources-efficient I/O operations. Today, we are going to learn how runtimes work under the hood.

This post contains excerpts from my book Black Hat Rust

The 3 most popular runtimes are:

However, there is a problem: today, runtimes are not interoperable and require acknowledging their specificities in code: you can't easily swap a runtime for another by changing only 1-2 lines of code.

Work is done to permit interoperability in the future, but today, the ecosystem is fragmented. You have to pick one and stick to it.

Tokio is the Rust async runtime with the biggest support from the community and has many sponsors (such as Discord, Fly.io, and Embark), which allow it to have paid contributors!

If you are not doing embedded development, this is the runtime you should use. There is no hesitation to have.

At the core of all async runtimes (whether it be in Rust, Node.js, or other languages) are the event loops, also called processors.

In reality, for better performance, there are often multiple processors per program, one per CPU core.

Each event-loop has its own queue of tasks awaiting for completion. Tokio's is known to be a work-stealing runtime. Each processor can steal the task in the queue of another processor if its own is empty (i.e. it has nothing to do and is "sitting" idle).

To learn more about the different kinds of event loops, you can read this excellent article by Carl Lerche: https://tokio.rs/blog/2019-10-scheduler.

When you want to dispatch a task to the runtime to be executed by a processor, you spawn it. It can be achieved with tokio's tokio::spawn function.

This snippet of code spawns 1 task that will be pushed into the queue of one of the processors. As each processor have its own OS thread, by spawning a task, we use all the resources of our machine without having to manage threads ourselves. Without spawning, all the operations are executed on the same processor and thus the same thread.

As a matter of comparison, in Go we use the go keyword to spawn a task (called a goroutine):

THIS IS THE MOST IMPORTANT THING TO REMEMBER.

The most important rule to remember in the world of async-await is not to block the event loop.

What does it mean? Not calling functions that may run for more than 10 to 100 microseconds directly. Instead, spawn_blocking them.

So, how to execute compute-intensive operations, such as encryption, image encoding, or file hashing?

tokio provides the tokio::task::spawn_blocking function for blocking operations that eventually finish on their own. By that, I mean a blocking operation which is not an infinite background job. For this kind of task, a Rust Thread is more appropriate.

Here is a an example from an application where spawn_blocking is used:

Indeed, the function crypto::verify_password is expected to take hundreds of milliseconds to complete, it would block the event loop.

Instead, by calling spawn_blocking, the operation is dispatched to tokio's blocking tasks thread pool. 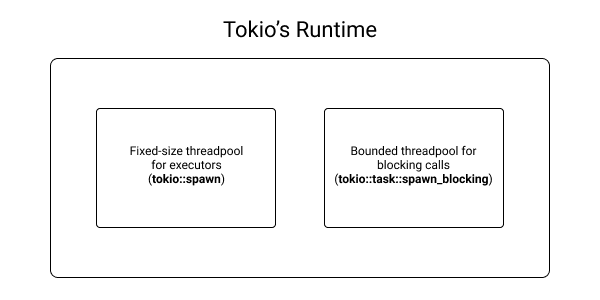 One fixed-size thread pool for its executors (event-loops, processors) which execute async tasks. Async tasks can be dispatched to this thread pool using tokio::spawn.

This is why async-await is also known as "Green threads" or "M:N threads". They look like threads for the user (the programmer), but spawning is cheaper, and you can spawn way more green threads than the actual number of OS threads the runtime is going to use under the hood.

Want to learn more about Rust and Security? Get my course Black Hat Rust.