Have you ever used public toilets in Paris? Trash, (Human?) excrements, and needles. A tiny fraction of users make it unusable for thousands to millions of people: a lot of Parisians prefer to pee in the streets (making them smell horribly bad) than to enter public toilets in the capital of France.

So the question is: how to enforce some basic rules so that public utilities stay usable for everyone?

A solution considered by an American startup is to assign a score to the users of the public bathrooms.

User IDs are part of Throne’s accountability system: After you use a restroom, you’re asked to rate its cleanliness. Meanwhile, each user gets a "Throne score," similar to Uber, and repeat offenders who abuse the restroom will be blocked. Weight sensors also track if someone’s been in the bathroom too long

A score that is tracked by a software system and that can prevent you from going to some places, you said? It reminds me of something 🤔

In order to get their rules enforced, Organizations and States historically had only a few tools at their disposal: physical punishment, jail, and fines.

But there is another way that China is experimenting to enforce its rules. A solution that relies on a score and high technology to "educate" the bad citizens: the social credit.

The idea is that bad actions such as jaywalking, spitting in the street, or paying your bills late lower your score, while good actions increase it.

When your score is too low, you are denied access to taking the train or the plane, and you can even be shamed in public with your face displayed on screens in public places and theaters.

The bad news is this system is pervasively coming to the West.

Today we have Uber and Airbnb (which means housing, food delivery, and transportation) who already use such scores. When working for them, you can get banned or get fewer customers if someone had a bad day and left you a salty review, or because someone was drunk and hit 1 star instead of 5, or simply because you behave in a way that can damage the reputation of these platforms.

The pattern is always the same: first, some data is collected. Then this data is reduced into a simplistic score which gives some entity control over the subjects. 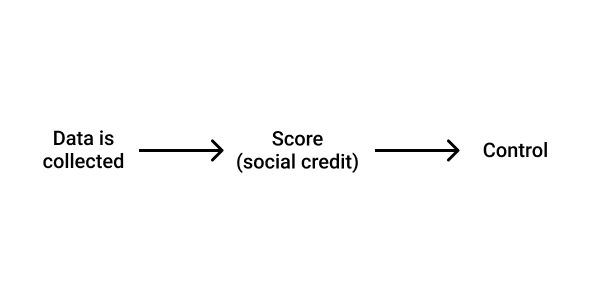 For the better or the worse, it's coming for public toilets, transportation, or, as it's already the case in some countries, your finances.

The end game is the same: you get denied access to utilities that once were considered public because of a score that gives a lot of leverage to bad actors that play with the system, whether it be disgruntled users, insiders, or your ex.

Where it becomes scary is that we can expect data brokers and "background check" services to emerge that will buy data from all these platforms to assign you a "unified score" that will be sold to your potential employers or landlords to decide if you are trustworthy.

So, because this guy was drunk when you were an Uber driver to pay for the food during your studies, you got your application rejected for this wonderful apartment.

And this is before talking about our always-expanding, already bankrupt bureaucracies that will be sold by some evil companies that they can reduce their law enforcement costs all while increasing the "efficacity" thanks to their ubiquitous artificial intelligence and big data solution™ that assigns a score to every citizen in order to increase social tranquility and pro-actively identify the troublemakers.

I really can't wait for this future!

But there is a way to fight back.

These systems rely on data collection, so the idea is simple: give them as little data as possible.

In our always-connected world, privacy is a fundamental part of our lives where we have on one side those who don't care and slowly become the slave of their data overlords and those who can fly under the radar of these automated systems, all while benefiting from the advances of technology, and enjoy a greater amount of freedom.

Evil people will always abuse your rights. You can stay passive and let them leverage the data against you, or you can fight back and let privacy become a skill.

So the question now is: How to feed as little data as possible to these systems and minimize your digital footprint in order to reclaim your personal freedom?

1 email / week to learn how to (ab)use technology for fun & profit: Programming, Hacking & Entrepreneurship.
I hate spam even more than you do. I'll never share your email, and you can unsubscribe at any time.
Tags: hacking, privacy