The foundations of end-to-end encryption: Key exchange (with code example in Rust)

This post is part 3 of the series: The foundations of end-to-end encryption and contains excerpts from my course Black Hat Rust about Security, Rust and Cryptography.

When 2 parties, let's say Alice and Bob, want to exchange messages over an insecure channel, they need to find a way to share a common secret that can't be guessed by potential eavesdroppers. 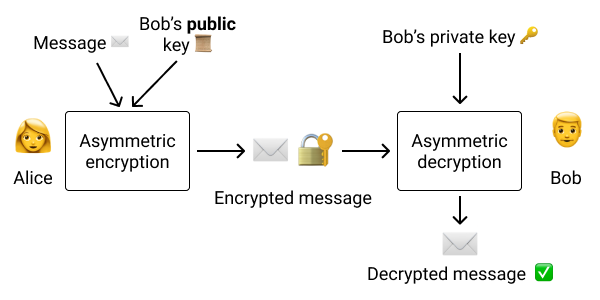 Because only the owner of the private key is able to decrypt content encrypted with the public key, from a cryptographic point of view, 1 public key = 1 identity.

Is it enough to secure our communication? Could we simply encrypt our message with RSA and call it a day?

Reality is quite different: public-key encryption is limited in the length of the messages it can encrypt, is painfully slow, and prone to bugs, especially RSA.

The modern way to achieve that is called Diffie–Hellman key exchange (or, more commonly, key exchange). It's a method to establish a shared secret between two parties through a public channel.

Nowadays, the recommended key exchange functions to use are Elliptic-curve Diffie–Hellman (ECDH), which are way simpler to implement than RSA encryption.

The (certainly) most famous and used Key Exchange algorithm (and the one I recommend you to use if you have no specific requirement) is: x25519.

Talk is cheap. Show me the code.

We are going to use the x25519-dalek for key exchange, and blake2 for KDF.

Then we generate the keypairs (private key, public key) for both Alice and Bob, and the nonce used for symmetric encryption.

To derive the shared secret for Bob, we need his private key and Alice's public key.

We then use the Diffie–Hellman secret with blake2b in keyed mode to generate our cryptographically secure key that can be used for encryption.

Deriving Alice's shared key is the same operation but using her private key and Bob's public key instead.

Finally, we verify that both parties have the exact same key.

Now we have our shared key that can be used with an AEAD function such as XChaCha20-Poly1305 to encrypt our messages, for example.

As usual, you can find the code on GitHub: github.com/skerkour/kerkour.com (please don't forget to star the repo 🙏).

Want to learn more? Get my course Black Hat Rust where we build our own end-to-end encrypted protocol to secure the communication of a Remote Access Tool in Rust.

1 email / week to learn how to (ab)use technology for fun & profit: Programming, Hacking & Entrepreneurship.
I hate spam even more than you do. I'll never share your email, and you can unsubscribe at any time.
Tags: hacking, programming, rust, tutorial, cryptography